Welcome to the
Windsor-Detroit MG Club!
The foremost club for British car owners in SE Michigan and SW Ontario!.
WDMGC can help you keep your car on the road. Be sure to head out to the next meeting of Windsor-Detroit MG Club to share some of your ideas and pick up tips from your fellow members!

Today’s Windsor-Detroit MG Club Spring gathering, a very nice turnout for a day that started cool, cloudy, and a bit drizzly. So great to see everybody, especially those of you from other clubs and those of you new to MGs!

- click on any image for a full size image slide show

MG2022 in Peterborough, ON ... Call for those interested in a Caravan! 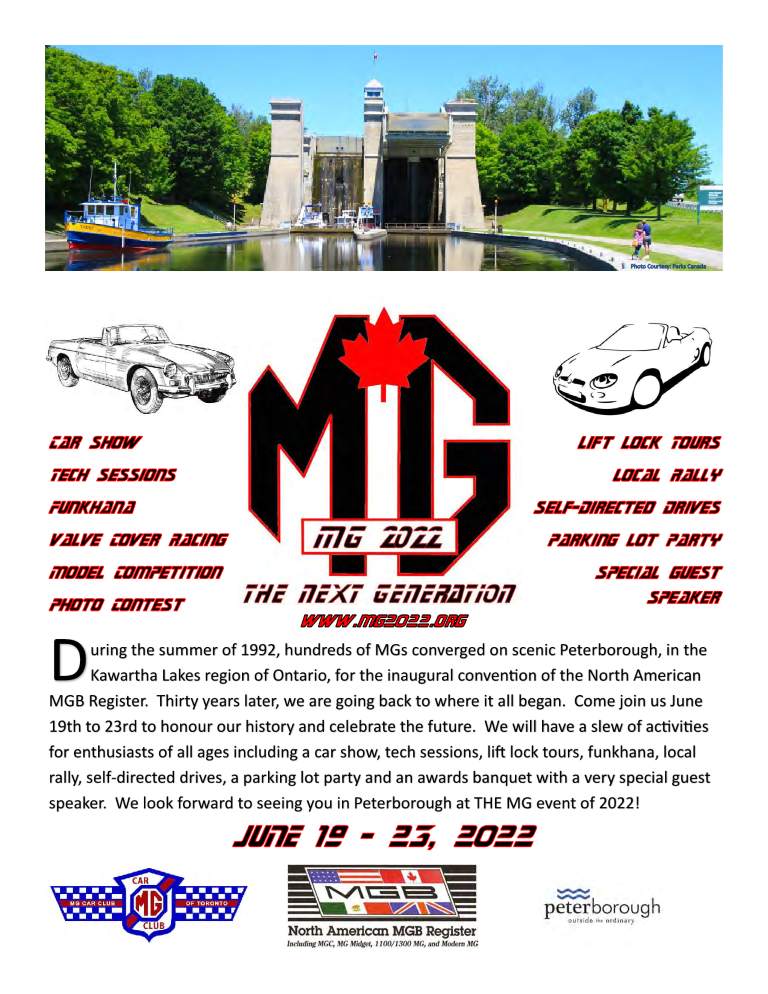 The National MG Convention is open for reservations.  And it is within driving distance at Peterborough, Ontario.

The Convention will be held June 19th through June 23rd.

WDMGC Vice President Kurt Ill is organizing a caravan to MG2022 in June on the US side of the border. The plan is to caravan over to Windsor and meet up with our Canadian counterparts, then drive on to Peterborough, ON, CA.

Kurt is looking for a preliminary count on who from our club has made reservations for MG2022 and would like to travel as a group to Peterborough. You can either respond throughout the WDMGC Facebook Page or through my club email.

For more information on the convention, you can visit the MG2022 Website.

Our December meeting has always been one that members look forward to because in addition to our normal activities, we usually also enjoy our gift exchange. However, since we started live meetings again this year, attendance has been down to about 50% of that we have had in “normal” years and it was decided by popular agreement in November that our regular format wouldn’t be appropriate this year and that attending members would instead bring gifts, not for one another, but as donations to Toys for Tots.

Even then there was concern that with only a fraction of our normal attendance, the number of toys brought along would not amount to very many. We needn’t have worried; the generosity of everyone who came was overwhelming. With some 24 people attending, we had about 50 very high quality gifts that were delivered to the local Toys for Tots the next day. 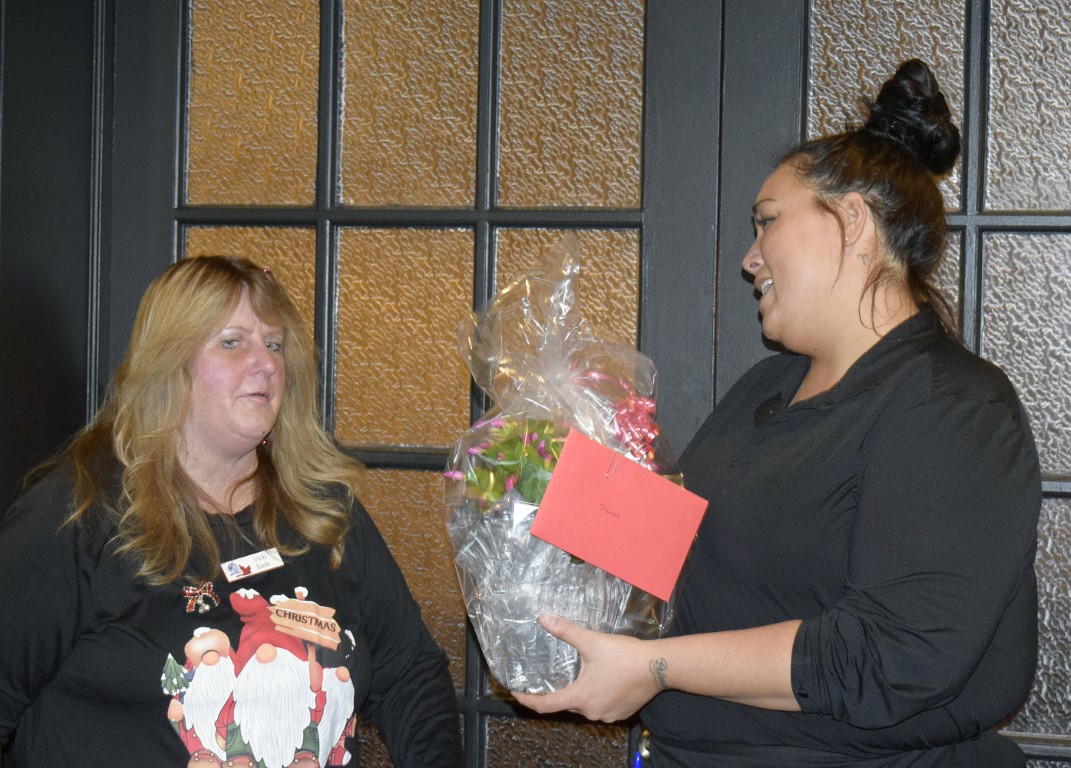 When Anne Astley — who organized the drive for the club — dropped them of at the local Toys for Tots warehouse she was surprised at the gratitude expressed by the manager to all in the club for their generosity . It turns out that this year the need is greater than ever, while at the same time, the number of donated toys is far less than in previous years, so our gifts were especially appreciate.

Below you’ll find pictures of most of the meeting attendees, many adding to the spirit of the season by wearing festive hats and sweaters. The Brass Pointe has always provided us with a dedicated server, one who always seems to remember what people prefer to drink and eat and who works very hard to ensure everyone is served in a timely manner. Following tradition, Vicki had the pleasure of presenting Sarah, who’s been our server for a couple of years now, with a gift in thanks for her hard work and attention to us.

Despite the rain Friday night and Saturday morning, Hines Drive was delightfully dry. So John Magee made the announcement to drive was on!!! This year's featured color was "green" since most of the the leaves decided to hold on for another week or two. But we still had a splendid Sunday cruise up Hines Drive and a fine cider and donut stop at Obstbaum Orchard. Come join us. (Driving photos courtesy of Monique sticking the camera up in the air and aiming it at the cars behind us, since we were in the front.)

- click on any image for a full size image slide show 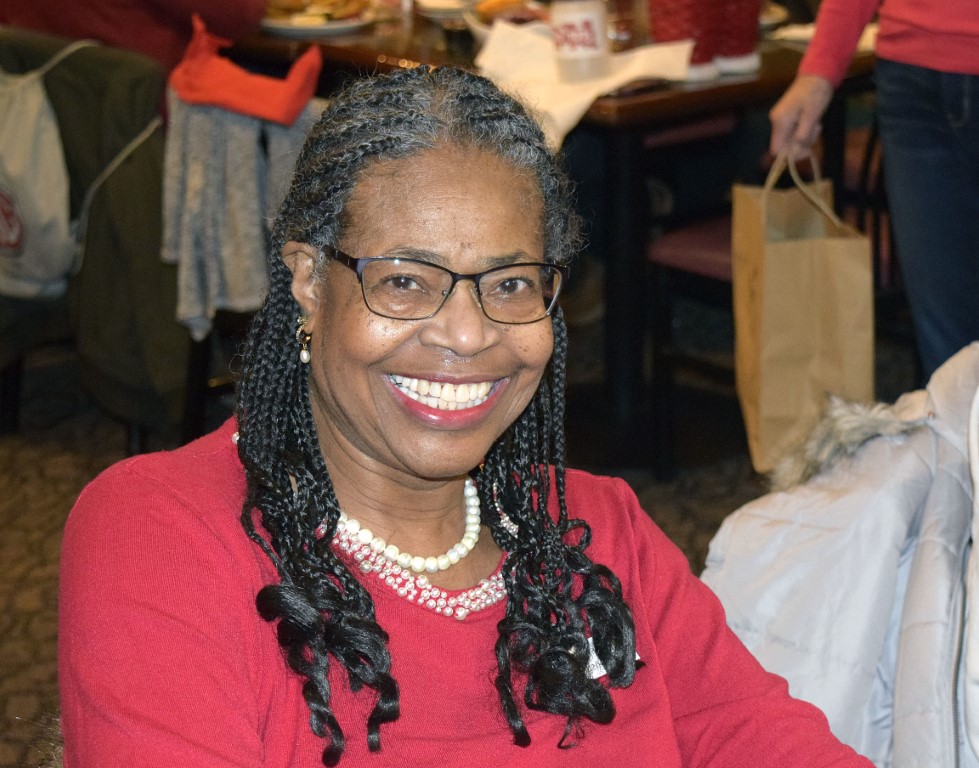 We are truly sorry to have to report the loss on January 30th , from complications from cancer, of our fellow member and friend Janet Anderson-Davis.

From almost the moment they joined in May 1999, Janet and her late husband Elvin became a force in our club and were soon known to many members because of their presence at so many events and activities, their volunteering together to manage our regalia, the quizzes they devised for meetings and all the fun they brought with them when they arrived in, – first their white MGB – and later the famous all red 1980 with matching trailer.

Janet was born in Detroit in July 1954, gained her BA in political science at Michigan State and her law degree at the University of Michigan. She met Elvin in 1980 and they were married in September of 1982. Working first for an insurance company, she later became an attorney for Wayne County and was often featured in local newspapers and TV news for her participation in high profile cases, particularly those involving ballot issues.  She even oversaw our own club elections, taking her responsibility very seriously, insisting for example that candidates should show their ID, even though she may have been casually chatting to them as friends moments before!

Elvin died in September 2020 and only a few weeks later, when she was still in deep grief, Janet’s friends and family were shocked to receive an email from her with the subject line, “… And now it’s my turn”, in which she described how after feeling shortness of breath, she visited a doctor, had x–rays and was told that she, a lifetime non-smoker, had stage-4 lung cancer. Many are described as having “battled” cancer, but with Janet, it was literally the case. After doctors told her early-on that she should consider palliative care, her answer was that they were not writing her off that easily and told them to think again, sought second opinions and treatment options, and eventually went to a different hospital group.

We remember Janet as a fellow club member, loving wife to Elvin, friend, mother, grandmother, a celebrated attorney, a voracious reader and super smart lady, but did you know she was also a published poet? In her book, Dance of the Warriors, she wasn't shy to dedicate this poem to Elvin.

And just days before her passing, she wrote to family and friends

My mantra for today:
My name is Janet
I’m here to say
I’m a very strong lady
On this blessed day
I will stand and walk
I will do my best
From toil I won’t balk
Give God the rest

Janet is survived by 2 children and 5 grandchildren to whom we send our deepest condolences.  A Celebrations of Life of her was held February 4th at which WDMGC members were present and one of us spoke about how much she and Elvin had meant to the club.

The meetings on the US side of the border take place at:

The meetings on the Canadian side of the border take place at rotating locations based on current situations.

It won't break the bank to be a member of WDMGC. If you pay in US funds, it's $25USD / year.  Payment in Candian funds is $30CAN per year. Canadians who pay dues via PayPal automatically pay in US Dollars.

WDMGC was able to go a few years with the same amounts for US and Canadian currency. However, it's been since February 2013 when the last time the Canadian dollar was on par with the US dollar. Lately the exchange rate has risen to as much as $1.30+ Canadian to $1 U.S. It will likely be some time before it returns to $1:$1 again.

If the Canadian dollar and US Dollar move to par value again, rest assured we will move the dues back in line.

Thanks for your Continued Support!

Welcome to our new WDMGC Members!

Welcome to the International Local Club!

You can join by clicking here!

The top reasons why you should become a card-carrying member of the Windsor-Detroit MG Club!